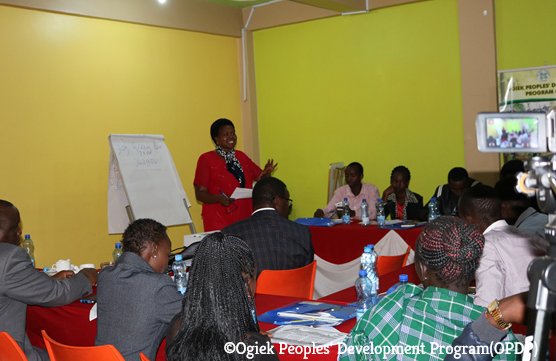 Many of Ogiek youth are yet to establish careers in either formal or informal sector due to limited access to information and resources.

This is despite of being part of generation regarded as crucial to driving the development agenda in Kenya. The present government has prioritized food security, manufacturing, affordable housing and universal health as priorities of development between 2017 and 2022.

These priorities dubbed ‘The Big Four’ capture the essence of youth inclusion to achieve the laid down objectives including creating an economy able to sustainably produce enough food to feed its population; creating more than 500,000 jobs annually and enabling low-income earners live in better houses.

In recognition of the important role Ogiek youth play, Ogiek Peoples’ Development Program (OPDP) has continued to run various projects intended at equipping them with soft skills to explore their technical know-how to become economically stable.

OPDP organized a two-day youth training held in Narok in February, 2019 where the Ogiek youth engaged with experts in furthering their understanding on nurturing their career.

The 39 youth who participated in the training were from Nakuru, Narok, Uasin Gishu, Kericho and Baringo counties and had either graduated or were continuing students in universities and colleges.

Mr John Samorai,Programs Officer at Ogiek Peoples’ Development Program(OPDP) informed the youth of the various ways they can directly and indirectly participate in meeting the targets of the Big Four including honing their skills in manufacturing through attending technical institutions, learning about strategies of mitigating impacts of climate change and infusing the knowledge in climate-smart projects and forming groups to access State grants and interest-free loans to establish profitable businesses.

“It is possible to empower fellow youth if you have empowered yourself,” Dr Rono told the youth.

He added: “Create an employment for yourself by identifying a problem and solving it.”

He advised against displaying uncivilized behavior on social media as this would work against them during job search as employers sieve through online platforms of potential employees.

On accessing State tenders, the youth were taken through the process of registering a business to how to place bids.

“It is a policy in government that 30 percent of the State tenders go to the minority groups who include the youth. Therefore, you are entitled to a State tender as long as you have a legally registered business,” observed Mr Godfrey Ochieno, a specialist in supply chain management.

At the same time, Mr Daniel Kobei, Director at OPDP took the youth through the Ogiek’s struggle to reclaim their land and human rights, the win of the community at the African Court, post-ruling activities including formation of Taskforce to look into the ruling as well as their role in safeguarding the rights of the community.

“You must wake up now and be actively involved in championing for the rights of Ogiek. The senior members of the community have done their part and the time is now to take over the mantle. You cannot afford to sit on the sidelines. This struggle is about the future of all Ogiek. You are doing a disservice to yourself and future generation by excluding yourself from the journey to securing justice for Ogiek,” Mr Kobei told the youth.

At the end of the workshop, the youth recommended converging them in a social media platform to facilitate sharing of information about the Ogiek and instituting a youth council to drive the Ogiek development agenda.

The workshop was held through the financial support of International Work Group for Indigenous Affairs (IWGIA).