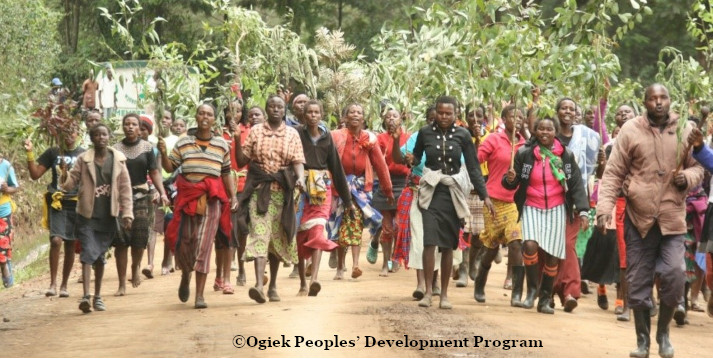 Protest over killings in Nessuit

The end of July 2020 saw ethnic clashes from Narok County in Olpusmoru spilling over to Nakuru county affecting Mariashoni in Molo sub-county and Nessuit in Njoro sub-county. Lasting for almost a week, these clashes left 12 people dead, over 100 injured and over 200 houses burnt. On 4th August Rift Valley Regional Commissioner, Mr. George Natembeya visited these areas.

He held peace talks with the warring communities amidst heavy police presence. He promised to find a permanent solution for the reoccurring tribal clashes by addressing the core issue which is land.

In the morning of Friday 21st August 2020, on returning home from a night in the maize plantations, the body of a 15-year-old boy was discovered. He had been shot dead the previous evening at his home.  Women and children took to the road heading to Njoro in a bid to seek for the Sub-County Commissioner’s help.

They trekked for close to 12km with babies on their backs chanting: “We do not want the Sub County Commissioner; we want the Regional Commissioner”. On getting to DCC’s offices the gate was locked and DCC was not there to address them.

A resident addressing the media present at the gate said “What is the government doing? Our human rights are being violated as a community. We have suffered, we do not have peace, we are sleeping in maize plantations.

The police are killing us and taking our properties. Where do we get help? We are pleading for peace in Nessuit area and we demand justice. The Department of Criminal Investigation is violating us”.This was aired at 7pm and 9pm news on KTN News and TV47.

“We have suffered enough. Please stop killing us, we need peace to be restored in Nessuit. We urge His Excellency Uhuru Kenyatta’s government to intervene immediately.”, another resident added.  The whole group of more than 200 hundred women and children sat in the marketplace waiting for the DCC. They waited for more than three hours however he did not show up.

The area Member of Parliament, Ms. Charity Kathambi, during an interview with the media condemned the killings and called for investigations into the murders. Shortly thereafter, the County Commissioner; Mr. Erastus Mbui called a meeting with Ogiek elders, he listened to their grievances and immediately made changes adding more police officers to patrol along the Ogiek-Kipsigis boundary in Nessuit and Mariashoni.

He promised to investigate the murders and look into the community’s claim over police partiality and excess use of force on citizens. He immediately made calls to ensure that the police posted to guard the boundary were not area residents or from either Ogiek or Kipsigis communities. The community has since Friday 21st August 2020, noticed a change in Nessuit where peace has been restored.