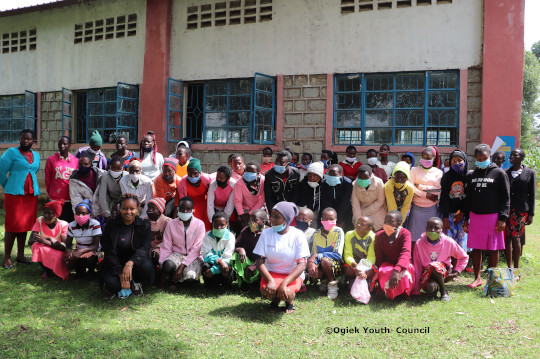 During the months of July and August 2020, Ogiek Youth Council (OYC) in partnership with VIVA Girls, has been running a program aimed at mentoring Ogiek adolescent girls. This program was able to reach over 200 girls in Mariashoni, Nessuit- Nakuru County, and Kesses location- Uasin Gishu County.

The theme for this program was “Effects of Harmful Cultural Practices”. FGM is still practiced amongst the Ogiek who are an indigenous community. This program also sorts to jam start an Anti-FGM campaign.

Indigenous girls are amongst the most vulnerable within indigenous communities being victims of triple discrimination based on gender, ethnicity, and socioeconomic status.  Since March this year schools have been closed due to the ongoing pandemic. It has been noted that there has been an increase in the number of teen pregnancies since lockdown started in Kenya.

Taking note of this, OYC is educating Ogiek teenage girls on their rights; right to education and brought to their attention the harmful effects of cultural practices. They put more emphasis on the girls’ right to say NO to FGM, early marriages, and sex. They were also educated on menstrual health hygiene management.

The mentorship was done by young college-going youths together with women from the community. The girls were encouraged to focus on education and helping out their parents at home during this time while they are at home. The older women urged them not to be confused by short term pleasures but rather focus on changing their futures through education.

During these meetings, the girls were able to air some of the challenges they are going through. These include, poverty, lack of access to hygiene and reproductive health products, the uncertainty of going back to school, and harmful cultural practices e.g. forced early marriages and FGM.

From the mentorship program, it was noted that one cannot educate the girl child without educating the boy child as well. Boys play a huge role in fighting these harmful practices because they are the key drivers. Boys should be mentored as well separately and together with the girls.

These mentorship programs should also be done frequently especially during holidays. Anti FGM laws should be enforced especially in the rural areas, there should be access to sexual and reproductive health products and parents also need to be educated on the effects of harmful cultural practices.

At the end of the lively and interactive sessions, the girls were given sanitary towels, t-shirts, and stickers to kick start the Anti-FGM Campaign in the region.

Previous Ogiek Cultural Day,2019 Next Protest over killings in Nessuit